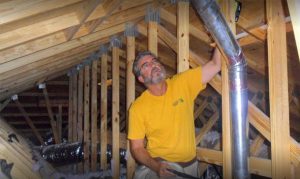 SNAKES! Always an interesting topic for the home inspector as they always seem to appears when you are not thinking of one, but instead concentrating on the insulation on the HVAC line or some other inspection responsibility… I have seen snakes under A/C units, in water heater closets, in attics and even under a refrigerator!  Yes, a neighbor of mine has had a Water Moccasin or Cottonmouth snake under her refrigerator twice, probably due to the kids leaving that triple sliding door open a tad!  She did live on a fresh water lake and Water Moccasins will be seen in this habitat much more often, near venues of water.

One thing common with one of the more venomous snakes, Water Moccasins don’t enjoy the presence of people, usually seeking out places that have the least human contact as possible.  But remember, we are in their habitat so there will be interaction, usually when you least expect it.  Make sure to keep doors closed to your house, and a screened in patio must be reviewed for functional screens and door sweeps!  Garage doors too!  A Moccasins natural habitat consists of calm waters, lakes and marshlands, or the thick vegetation that grows near shorelines.  If walking around outside of home pay close attention to bushes and other components that a snake will hang near and sometimes call home for a while.

Probably the most common snake you will see in SW Florida is the Black Racer Snake, non venomous and usually between two and four feet long and extremely fast, a Black Racer will bite if picked up or cornered.  The spring time will show much more activity as well, and there will be more baby snakes around, sometimes only the size of a large worm.  Black Racers should not be confused with the thicker Indigo Snake, which is a bit more docile, approachable and not as likely to bite if handled.  Remember my advise about your screened in patio, a staple in most houses here in Florida.

My nightly routine of reading outside in the evening was rudely interrupted one night in March of last year, as a Black Racer Snake was curled up on the back of my chair, waiting to greet me with a kiss!  Turned out my door sweep under screen door was not sealing properly with ground line, giving the snake access to our patio and possibly the inside of our home.  Did someone say I now put snake repellant purchased in Home Depot around the outside of this entrance?  OK , I admit it, growing up in Long Island New York did not prepare me for future encounters with Florida Snakes!!