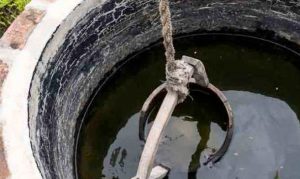 Thank you for taking the moment to read on about this hugely important subject, the safety of our homes water and in particular the water in private well systems.  Most homeowners with a private well system I believe do not know some of the important facts that go with maintaining the integrity of and owning a private well.  Almost all customers that are doing a home inspection will never choose to do a water survey and instead rely on the wells water treatment components to blindly do their job.  NOT A GOOD CHOICE!  Drinking water should be free of disease-causing organisms and should not contain harmful levels of chemicals. Two standard tests — for coliform bacteria and nitrates — should be performed regularly on every well. Testing for other contaminants may also be advisable depending on the history of the well and its findings.  Never rely on water treatment systems without a regular annual sampling schedule to verify the content in your water.  A water test tells only about the quality of the water at the time the sample was taken. Groundwater pumped from some wells, particularly shallow or old wells, may vary in quality during the year, especially after heavy rainfall or flooding.  More frequent testing of old wells or for wells less than 50 feet deep is recommended.  At a minimum, private wells should be tested for coliform bacteria once a year and for nitrates every two or three years. If nitrates have been previously detected, the well should be tested for nitrates every year. Whenever a well is opened up, the water should be tested afterward for coliform bacteria.  Any time there is a change in the quality of the water, it should be tested for coliform bacteria and nitrates. Notify a licensed professional in your area to take samples as per laboratory and State Dept. of Health standards.  And yes, our company provides this service, working hand in hand with Sanders Laboratories of Lee and Charlotte counties.  Lets breakdown some of the more concerning contaminants that could affect your well water and your families health in general.

Total Coliform Bacteria and E Coli:   Waterborne diseases can be spread by drinking water that has been contaminated with fecal waste from humans or animals. Examples of these diseases include salmonellosis, dysentery, and hepatitis. It may take only a small number of disease organisms to make someone sick. The symptoms of these diseases often include diarrhea, nausea, vomiting, and sometimes fever. It is not unusual for people to mistake a case of water-related disease for food poisoning or a 24-hour flu bug. Remember that contaminated water can often look, smell and taste fine.  Coliform bacteria can be found everywhere on the land surface but are usually not found more than a few feet below the soil surface. Coliform bacteria are also found in the intestinal tract (and fecal waste) of all warm-blooded animals. Most coliform bacteria do not usually cause disease, but if they show up in a water test, they indicate that surface contamination has somehow entered the water, and disease-causing organisms may also be present. Remember that waterborne infectious disease is caused by fecal contamination, which is usually found only on the ground surface (in the case of animal waste) or near the surface (in the case of contamination from sewers or septic systems).

Nitrates: Nitrate (NO3) is a chemical containing nitrogen and oxygen and moves easily through the soil to the groundwater. Some nitrates occur naturally in groundwater that is near the surface, but the levels are usually low (less than 1 milligram per liter (mg/L).)* Nitrate levels in groundwater of 1 mg/L or greater usually indicate contamination from fertilizers, animal waste, or subsurface sewage treatment systems. In some wells, particularly drive-point wells or other types of shallow wells, nitrates may only be present after a heavy rainfall or flooding when rapid infiltration of surface water occurs.  Because nitrates can move rapidly down through the soil and into the groundwater, the presence of nitrates may provide an early warning of possible problems and can sometimes indicate the presence of other contaminants. Boiling the water will not remove the nitrates; in fact, it will actually increase the concentration of nitrates in the water due to evaporation of some of the water. Also, it is not recommended to rely on a home water-treatment device to remove nitrates from water fed to infants because there is usually no way to immediately tell if a treatment device has malfunctioned. For infant feeding, bottled water or water from a source that is known to have low nitrates is recommended instead.

Arsenic: Arsenic occurs naturally in the groundwater, and about 10% of wells produce water that exceeds 10 micrograms per liter (µg/L), which is the federal safety standard for drinking water. Long-term consumption of arsenic above that level may increase the risk of health problems related to skin, the circulatory system, or the nervous system, including some types of cancer. Every private well should be tested at least once to determine whether arsenic is present in the water, and at what level. Arsenic levels in groundwater will not usually change much over time. Long-term consumption of  well water with arsenic levels above 10 µg/L should be avoided.  If the water contains arsenic, it may be possible to solve the problem by drilling a deeper or shallower well. If low arsenic levels cannot be obtained, it can be removed by reverse osmosis with pre-oxidation, distillation, ion exchange with pretreatment, or with adsorption media systems available through many water-treatment companies.

Fluoride:  Fluoride is naturally present in the groundwater in some areas, but usually in low concentrations (less than 1 mg/L). Fluoride concentrations of approximately 1.5 mg/L can be beneficial in forming human teeth and helping to prevent cavities. Discoloration or damage of teeth can occur if the concentration of fluoride in the water is too high. Some areas do exceed the health limit for fluoride. A test for natural fluoride can give a homeowner’s dentist useful information about whether their children or adolescents should be using fluoride supplements.

Lead: Water can dissolve lead from old lead pipes, lead-soldered copper pipes, or brass plumbing components when the water stands in the plumbing system for more than a few hours at a time. Infants, children and pregnant women are especially vulnerable to the potential health effects of lead. Too much lead can damage the nervous system, red blood cells, and kidneys. The intake of lead should be as low as possible.  If the household water contains lead, it is most likely coming from the plumbing system, rather than from the groundwater. Lead may be dissolved from metal water pipes and plumbing fixtures as the water sits idle in the pipes. Flushing the system in the morning or after other periods of non-use can significantly reduce lead levels. Reverse osmosis or distillation can remove lead. For community drinking water systems, the EPA requires that action be taken to reduce the level of lead in the water if reaches 15 µg/L. Homeowners can minimize their exposure to lead in their drinking water by letting the water run until it gets colder or at least 30-60 seconds before using it for drinking or cooking. Avoid using water from the hot water tap for drinking or cooking because hot water dissolves lead more quickly.

Iron:  Iron is naturally present in some groundwater. It is typically not a health concern, but concentrations above 0.3 mg/L cause an objectionable metallic taste. It can also cause reddish-brown stains on plumbing fixtures and clothes during laundering, as well as encrust well screens and clog pipes. Water softeners can typically remove up to about 3 mg/L of iron. Manganese greensand iron filters, which are regenerated with potassium permanganate, can remove higher concentrations of iron.  Water that exhibits swampy or oily tastes or smells, or red, slimy growths in toilet tanks may indicate that there is iron bacteria in the well and water system. These bacteria do not cause disease. Iron bacteria can be treated by physical removal, pasteurization, and chemical treatment, such as shock chlorination.

Hard Water Minerals: Hardness is caused primarily by calcium, magnesium and iron ions in the water. The higher the concentration of these minerals, the greater amount of soap that is required to produce suds. The soap that is combined with the minerals leaves an insoluble scum, which causes laundry and staining problems.

Sulfates: Sulfates are a naturally occurring ion present in groundwater. Sulfate concentrations above 250 mg/L can act as a laxative. Most people become acclimated to sulfate after a couple days and the symptoms disappear. Infants should not be given water with a sulfate concentration above 400 mg/L. Well water having an odor of rotten eggs may indicate the presence of hydrogen sulfide gas, which can be produced by sulfur bacteria. It can often occur together with iron bacteria. Treatment techniques for sulfur bacteria are similar to those for the removal of iron bacteria.

** Here in Southwest Florida high sulfate levels in the water will also affect interior copper and metal components, sometime developing a ” blackening” corrosion that attaches to copper plumbing extensions, copper grounding wires and other copper or metal components in the home.  These corrosions are quite similar to the blackening corrosions associated with toxic (Chinese) drywall as well, the historically bad drywall used in many new home builds between 2003 and 2007.  It is nearly impossible for a home inspector to determine the source of this corrosion if the home is built between 2003 and 2007 and is on a well system.  Further testing is needed.

VOC’S:  Volatile organic compounds (VOCs) are common components of gasoline and other fuels, as well as products such as solvents, paints, cleaners, and de-greasers. Long-term exposure to VOCs above state health limits may damage the central nervous system, liver, or kidneys.  Some VOCs are known to cause cancer. If the property is near a commercial or industrial area, a gas station, or a landfill, and especially if the well is old or shallow, the homeowner should consider having their water tested for VOCser should consider having their water tested for VOCs.

Pesticides:  Private wells most at risk of pesticide contamination are shallow or old, located close to areas of pesticide use or storage, and located in geologically sensitive areas, such as sand plains or karst (weathered limestone) bedrock areas. Wells that have high levels of nitrates are also more likely to have detectable levels of pesticides. If the homeowner has an old or shallow well and lives in an agricultural area, or if the well has a high level of nitrates, they should consider testing their well water for one or more of the pesticides used most frequently in their area.

Radon: Radon is a naturally occurring radioactive element that exists as a gas dissolved in some groundwater. It can be released into the air when water is run inside the home.  However, well water usually contributes only a small fraction of the total amount of radon in indoor air. Exposure to radon increases the risk of developing lung cancer. Simple, low-cost detectors for radon gas are available. If the air inside the home has annual radon concentrations at or above the EPA’s action level of 4 picocuries per liter (pCi/L), steps should be taken to reduce the radon level.

The goal should be to have a naturally safe, potable water supply, without the need for chemical treatment to safeguard health. If any type of water treatment is used, it is critical to install the right treatment device, perform regular maintenance, and test the water on a regular basis to make sure that the treatment system is functioning properly.